This year I wasn’t feeling it. I had won first place for the last two years. In fact, last year even I won the now-discontinued cubicle decorating contest, too. My plan was to just skip it all and rest on my laurels. But then I saw this scene (which I’ve seen a million times) and noticed something new:

How had I never noticed it before, Disney fan and knitter that I am? I decided to go as Mary Poppins this year … but only if I had her scarf! No scarf, no costume.

My yarn stash is getting a little crazy as it is, and I’ve told myself no new yarn until I use up some up of what I’ve got. So, I fudged the colors of her scarf so I pull from the stash (and maybe earn the privilege to go yarn shopping again!). Mary Poppins’s scarf is more of a coral pink than a blush pink, and the orange stripes are more red orange. So my colors were “practically perfect.” (And yes, I’ve been overusing that phrase lately. It’ll probably show up a few times in this post. Hopefully it will wear off once Halloween is over.) It’s a simple crochet mesh pattern. The mohair was getting in the way of seeing the holes though. This is why I don’t work with mohair much! I only had eight stitch markers at my desk (markers I borrowed at that) to keep track of my spaces, so I had to improvise with safety pins and bobby pins. You can see them in the photo at the top. I thought it was rather genius, if I do say so myself! A DIY Stitch Marker hack necessitated by Halloween!

My progress as of 4:30 p.m. on October 29 … no more time to procrastinate! Spit spot, as Mary Poppins says!

Of course, I didn’t finish the scarf. Really, what was I thinking being able to finish a whole scarf in two days? But by that time I had invested too much time to ditch the costume idea. And I had done too much research on Mary Poppins’s wardrobe.

It’s an easy costume for anyone who needs last minute ideas (for the future … it’s noon on Halloween, so probably too late for this year). Ended up winning 3rd place. (You can see the winners on C&T’s Instagram.) Not too shabby. Plus, I got about half the office singing Supercalifragilisticexpialidocious. (Spelled that right on the first try, according to spellcheck! Ha!)—that was better than any prize! They should have never doubted that I know all the words!

Sorry, the cell phone photo is a little blurry. Still, you get the idea. Fun fact: With my glasses off in this photo, I couldn’t see a thing!

Happy Halloween, everyone (even if I don’t like it)! And Happy All Saints Day! It’s raining here, so this feels appropriate:

Oh, It’s a jolly holiday with Mary
Mary makes your heart so light
When the day is gray and ordinary
Mary makes the sun shine bright 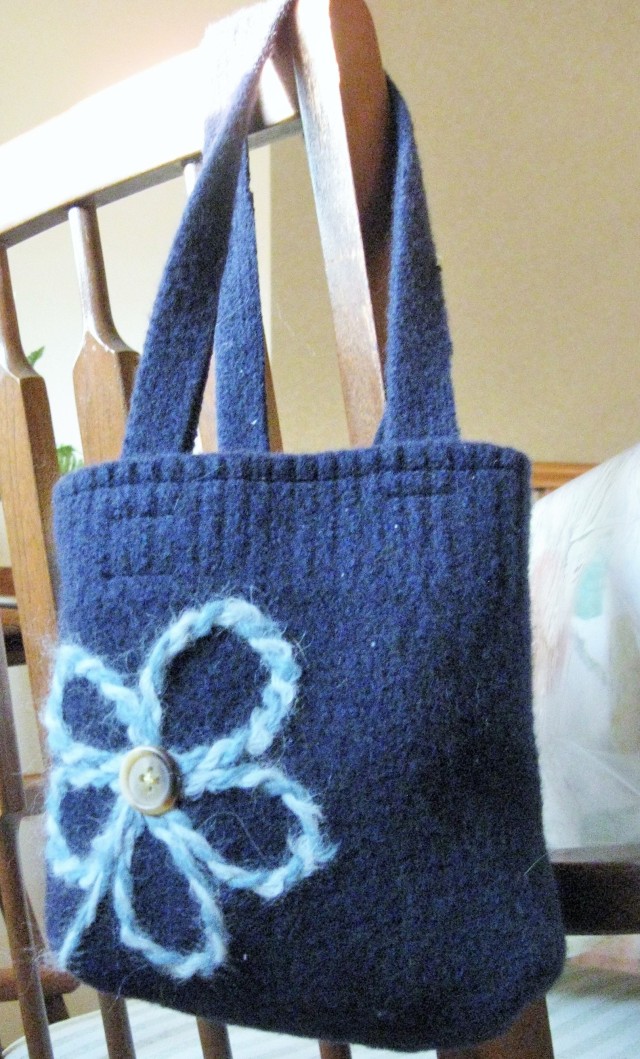 It’s finally Friday! This week’s finished project is a DIY refashioning of an ugly old sweater into a cute felted tote bag. The best part? Because I only used material from the sweater (and a few scrap bits of yarn floating around), the whole think only cost about $2.50 and a half hour of time. Sweet!

Anyway, I had picked up a couple of 100% wool sweaters on sale at the ARF thrift store and then proceeded to felt them by throwing them in the washer and dryer a couple of times. Suddenly that extra large cardigan-style sweater was toddler size. I cut it up and made a basic tote with gussets. The handles are from the strip where the buttons were. The flower is needle-punched on using yarn scraps of questionable content (I thought it was wool, but it wasn’t sticking to the felt very well so it probably had a good amount of synthetic fiber too). Oh, and the button is from the sweater, too.

Really not a whole lot more to say about it, except that it’s a lot smaller than I envisioned. Makes a great lunch bag, though.

It turned out more or less exactly how I wanted (just, you know, smaller). I’ll make a few more, for sure. Might ditch the lining as it’s kind of superfluous.

Linking up to Finish It Up Friday at Crazy Mom Quilts. Also, would anyone be interested in a tutorial on this? It’s a simple project, but fun. And it’s helpful to know how to cut the sweater to preserve that “cuff” of ribbing along the top.